A breakfast meeting with David Blaine last week was a very pleasing and revelatory experience; it’s good to sit and talk with someone who really, really gets true showmanship, spectacle, creativity, word of mouth and viral publicity and who has encountered many of the same things I’ve encountered, even the Russian circus act with a coat of living minks. 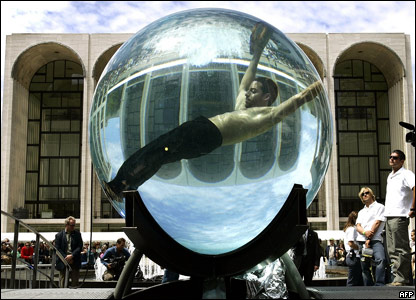 Blaine is a great, great grandson of Barnum and has built his persona on the Barnum and Houdini models, always connecting with his audience and constantly astonishing them. Most importantly, he is always sure that they are talking about him. He knows that without promotion something terrible happens. Nothing!

A perfect case in point is the trick he showed me. I didn’t dare ask – it felt too gauche – but Blaine offered. He got me to shuffle a pack of cards and lay out two lines of ten cards, making sure that each one was different. Then he asked me to take ten of them and hold them behind my back. Next, he suggested I look at the remaining cards and mentally pick one. “Not the Ace, it’s too obvious,” he said.

I chose the four of diamonds and told him that I’d chosen. Next, he made a gesture and told me to place the cards I held behind my back on the table. The ten cards I had hidden behind me were now eleven in number and sure enough, the eleventh card was the four of diamonds. I was gob-smacked. I have absolutely no idea how he did it – it seems an impossible trick.

But this is the reaction Blaine is constantly seeking, since he instinctively knows I would go away and talk to several people about the trick and how astonishing it was and, in this way, his reputation would be perpetuated. Now, of course, I am also blogging about it. The chances are that his reputation will spread in ever increasing circles if everyone who is astonished by him does as I have done.

Just as interesting was the revelation that Blaine actively thrived on the people who came and taunted him with food and insults whilst he was attempting to live on only 4.5 litres of water a day in a Plexiglas box above the Thames. “I needed people to react in the way that the did to get through the stunt,” he told me.

Their antipathy during his 44 days of starvation gave him something to prove to the haters and became a media focus for the endurance stunt, guaranteeing it more coverage and even comments from then-President Bush. No wonder he was heard to murmur “I love you all” when he finally completed the stunt.

He is the greatest modern showman / illusionist and will remain popular as long he can maintain the incredibly high creativity, the quality of his unique stunts and continue to amaze and astonish. Celebrities, brands and publicists have a lot to learn from David Blaine.