A career in PR always provides challenges – certainly I am cautious about some of the work I’ve undertaken and have, in retrospect, had to face out some of the poorer decisions I’ve made, such as promoting alcopops. With this in mind, it’s interesting to see that the Climate Camp 2009 protestors have targeted Edelman for its work with Eon and the proposed Kingsnorth coal-fired power station, standing naked in Edelman’s HQ and demanding transparency. They want to ‘expose the naked truth behind Edelman’. 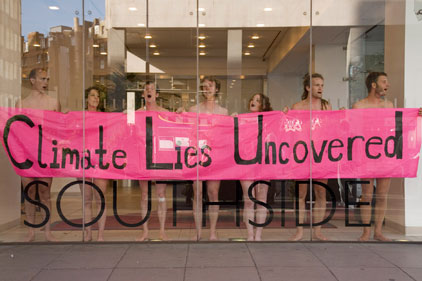 All well and good; transparency is the watchword of the PR industry now, and will become more like a mantra as time goes on, but I think the protestors’ target is a little soft, given that Edelman are already pretty transparent about their client list. There are other, worthier targets that the Climate Camp protestors need to target if they’re serious about transparency and the naked truth, however.

PR has flourished in the last ten years. It’s seen as a glamorous world, despite the critics who argue that anyone entering it is signing a pact worthy of Faust. Despite both of these perceptions, there are many companies that draw a clean line through the industry. Of course, there are also PR companies out there who covertly take big bucks from tobacco briefs (which are still out there, more than ever since the government’s stance on tobacco advertising has changed), from oil companies, big pharmaceutical companies and the odd despot who needs his reputation laundering. That old PR adage, ‘the dirtier the client, the bigger the budget’ still holds true – the money goes towards make them seem and feel clean to the world at large, hides them behind smokescreens of PR.

The world is facing a myriad of challenges in the coming years and the big test now, for anyone coming into PR, is to decide how to tread the line between profit and a clean profile, the ability to be trusted. The Nick Naylor model of lobbyist and PR, based on the amoral fictional lobbyist and PR man in Jason Reitman’s film Thank You For Smoking, is not going to be easy to escape from as the fight for profit gets harder. This is the sort of man who, when asked why the American government is the best in the world, tells his son that it’s “because of our endless appeals system”.

It’s going to become ever more difficult to stay true to one’s core values with the weight of this sort of cynicism bearing down on people who are desperate to make money in a fast-changing world. The bigger agencies demand hard financial returns, sometimes over and above the wants of the employees; smaller companies often just feel the pressure of having to scrabble for work. Bear in mind that 15 years ago, when I gave talks about PR, I used to face tough, searching questions about the work; this rarely happens now. That’s reason enough to worry.

It doesn’t help that the only lesson seemingly being learned from the early release of the cancer-stricken Lockerbie bomber al-Megrahi is that oil buys you freedom. PR can be used all too easily to obfuscate the issues that need confronting – let’s not forget Bhopal or the way the Gulf War was sold. For PR people committed to keeping a clean nose in the industry, transparency means the need to shine a light on psy-ops and dirty tricks – the old school activities of lobbying and public relations. Lessons can be learned from the Climate Camp protestors – and, indeed, by the Climate Camp protestors.

They are passionate fighters, well versed in the direct action movement as exemplified by Greenpeace, but if they really want to make a difference, there are plenty of likelier targets they should be aiming at, naked or clothed. They should be looking into the companies that are nothing like as open and transparent as Edelman. When the Climate protestors really get their teeth into the issue, there are going to be plenty of companies who will be quaking in their boots.