I’ve been travelling around California for the last 10 days, taking in the sights and sounds and meeting people on a research trip for a book on the ways that sexuality has been used to create fame. Hollywood is a spawning ground for media whores, after all. I thought I’d be taking time out of blogging, but there are three celebrity stories subsuming the news in the USA at the moment and I could not let them pass as, even by my own standards of morbid interest, the American news coverage of Lindsay Lohan, Mel Gibson and Rachel Uchitel’s latest shenanigans is overkill.

Mel Gibson’s everywhere, in stories relating to the tapes that are allegedly of him violently, angrily haranguing the mother of his youngest child, Oksana Grigorieva, in racist, sexist and vulgar terms. It smacks of a put-up job to me, but it’s a story that will run and run.

Lindsay Lohan, in case you missed it, is also in trouble, serving ninety days in jail for drink-driving offences. If you were judging by the amount of comment and analysis the story’s getting, you’d expect her to have been found guilty of triggering an unprovoked nuclear attack on the Falkland Islands or something similar. Not that Lohan will serve her time – the latest reports suggest that she could serve as little as nine days “because of overcrowding”.

Meanwhile, Rachel Uchitel (Tiger Woods’s mistress) has joined Celebrity Rehab – despite the fact that it has been revealed she has no addiction (home wrecking doesn’t count). Since meeting the show’s doctor, a story has started to spin out into the news that she has a pill addiction, to the prescription drug Ambien. It’s intriguing to discover that Donald Trump, of all people, fired her from the Celebrity Apprentice show because she was appearing on too many other reality shows – perhaps he had spotted her genuine addiction to fame.

What’s fascinating is how far these stories have spread into the American mainstream. These celebrity stories are being poured over by thousands of commentators, from attorneys to councillors (although there are no publicists – they’re all too careful to bite the sort of hands that are feeding them vast amounts of cash I suspect) but what is shocking is that even Time magazine is commissioning features – notably on the psychology behind Mel Gibson’s rage. 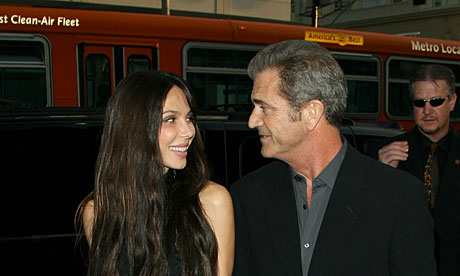 The appetite for showbiz is vast in America and is beginning to eclipse the serious news. I thought this obsession would have begun to abate by now, but it’s growing – the feeding frenzy gathers ever more vultures and hyenas. Now you don’t have to be an A Lister to get the CNN treatment in the USA, as Rachel Uchitel and Oksana Grigorieva have proved – they are part of a growing number of very minor celebrities using their connections to get as far up the greasy pole of fame as possible.

There are no genuine stars left as a consequence. The true talent being employed these days is the creation of compelling personal narratives and who can wear them best. Do we care what stars do on screen when the celebrity storyline overpowers box office appeal in these creatively lean times. Infamy equals megabucks – but anyone seeking it really should remember the one lesson that can be learned from Carry on Cleo: “Infamy, infamy, they’ve all it got it infamy!