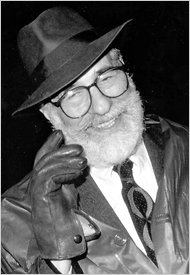 I went to the wake for Jay Landesman yesterday evening and it was wonderful to see a collective spirit present and some great people gathered to pay tribute to the great man. Perry Benson was there; John Cooper Clarke paid tribute in his inimitable style; it was also great to see the amazing Jim Haynes, who founded the Arts Lab and co-founded International Times and the Suck newspaper, for the first time in many years.

Jay was an astonishing man, embedded in the Hampstead and Islington literati to the hilt in the 60s, 70s and 80s. He’s one of those types of people who’s like we’ll never see again, simply because of the times he was formed in and the circles he moved in, first in America amongst the jazz and beat movements and then in Britain. The politics and influences that he was raised with are long gone and will not return, but they’re worth remembering – I was glad to celebrate the life of one of the most vibrant exponents of those times.

I met Jay at the tender of age of 20, through Michael Horovitz, at a Christmas party – I felt like a child going into a sweetshop, as I quickly found myself surrounded by some of the biggest cultural influences in my formative years. Lawrence Ferlinghetti and Gregory Corso were there, as were a great many other counterculture icons from both sides of the Atlantic. I was welcomed in to the party by a beautiful woman, little older than myself, who kept me company for much of the night. I’d landed on my feet, I thought. I was at a hell of a party with a beautiful woman to talk to – and maybe more.

In the small hours of the morning, I made a pass at her, high on the company and the party. She laughed. I was crestfallen. I asked why she had rebuffed me. “I’m Jay’s girlfriend,” she told me. “What about Fran? Isn’t she his wife?” I asked. It was one of those sorts of marriages, she told me. Keen to be certain that she wasn’t just pulling my leg, I asked her why a beautiful young woman would go out with a so-much-older man. “Well,” she said, “it’s pretty simple. Jay’s got the biggest cock in the whole of London.”

He may well have done; I’ll never know for certain. But one thing’s for sure: he and Fran threw some of the best, and best connected, parties in London for many years, and his sharply witty Chicago drawl, raised in my direction over the hubbub of the Groucho Club in a more often than not successful bid to draw me in to some fascinating conversation, is much missed.