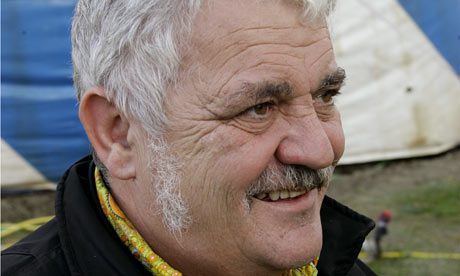 The obituary I wrote for the Guardian, celebrating the life of Pierrot Bidon, was published in this morning’s edition. Here’s an excerpt:

“‘The welding torch, when it is used at night,’ said Bidon, ‘is a very beautiful thing, is it not? Why not use it in a circus?’ Instead of sawdust, the Archaos circus ring had the air of a factory floor. The troupe cast their spell with a show that broke every rule. Traditional circus was all sequins, ivory juggling clubs, velvet and spandex. Bidon’s big departure, which resonates to this day in everything from Cirque du Soleil to the Trash City and Shangri-La fields at the Glastonbury festival, was to arm his performers with oxy-acetylene torches, motorbikes and semtex, and clad his performers in boiler suits and corrugated iron. Crash helmets replaced red noses; topless trapeze artists swung from forklift trucks and huge cranes inside a tent hung with white ropes like a gigantic spider’s web. Fire-eating performers in leather thongs and grotesque eyeliner coughed up flames that singed the front rows. It was visceral, grungy, primeval and anarchic; Bidon had created entertainment that took the audience to the edge.”

An obituary also appeared in the Telegraph – click here to read it.