People are reading fewer print newspapers now than they were fourteen years ago.

We know, hold the presses right?

But we didn’t come here to tell you what you already knew.

We’ve put together a graph plotting the circulations of five daily broadsheet papers over the past fourteen years. The overall shapes might be familiar, but below and on the graph we’ve highlighted some surprising things you might not have been aware of. 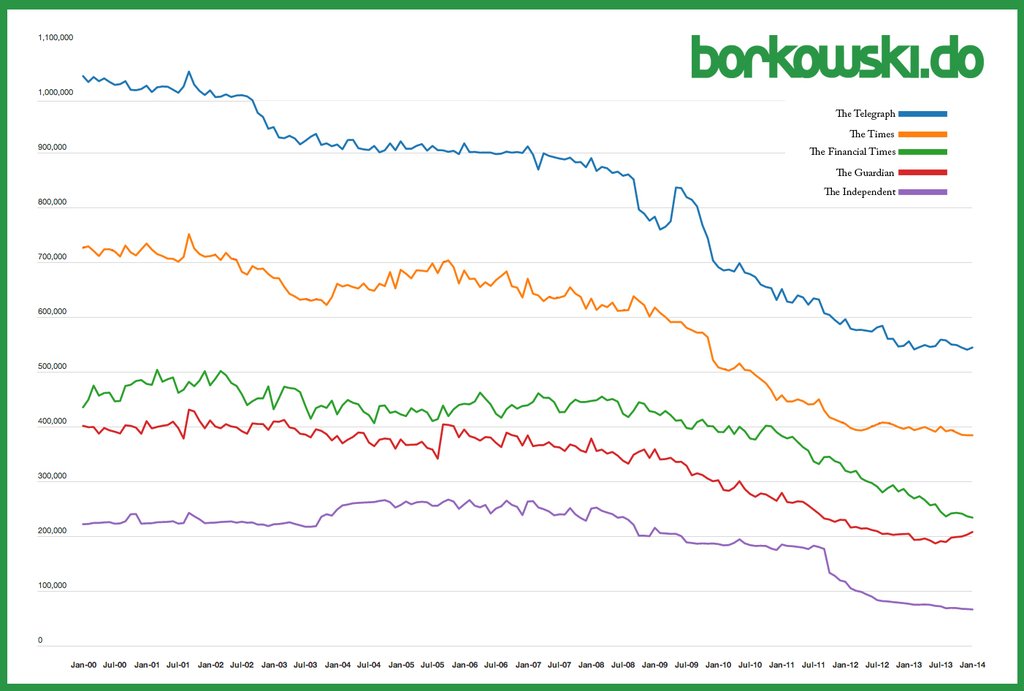 Here’s the most important thing: as we tell our clients, always check the bathwater for babies. Of the papers we looked at, only one – the Financial Times – remains in steep decline in its print circulation (this could be explained by the FT’s present digital push, and its wealthy, tablet-owning audience).

Of the rest, two have been near-level since 2012 (The Telegraph and The Times) and one is actually reaching more people than it was this time last year (The Guardian).

So think twice next time you’re chatting away at a dinner party, happily accepting “the death of print” as a given. The old days are long gone, but this is a medium which still has a role to play in any communications strategy.

Major news events are still a driver of sales.

In 2001, established, trusted news sources The Guardian, The Times, The Daily Telegraph and The Independent all saw a spike in circulation. The public were rushing to newstands to find out what had happened in New York on September 11.

In subsequent years, the major events that drove sales were those which individual papers could lay claim to.

When a paper leads the agenda on a major event, it benefits from a circulation boost. This suggests that readers keep returning to the source of the story for the most pertinent and trusted updates. You’ll notice this in our data for The Telegraph in November ’09, following their breaking of the expenses scandal. You’ll also see it at The Guardian after their publication, with Wikileaks, of the Afghan war logs in July 2010, and their recent use of the Snowden files.

The Times also enjoyed a spike when it launched its “cycle safe” campaign in 2006.

This suggests that the public still recognises distinct brands within the print media. Even as online habits dilute readerships, people will return to the source of an original story.

We should point out that these stories don’t boost the brand in the long term: just look at The Telegraph, whose expenses scandal boost was followed by its most dramatic decline.

The benefits of switching to new formats are now, in all cases, negated.

The Times, The Guardian and The Independent all benefitted from launching smaller print formats during the last decade.

The circulations of all three have now dropped below where they were before switching to the new formats.

This shows that public resistance to print runs deeper than a feeling that it is inconvenient. It’s unlikely that minor improvements to a print format will ever reverse the general decline – reading habits have changed too much.

Of the papers we looked at, arguably The Telegraph, the Financial Times and The Guardian have been most ambitious in their digital strategies. The Guardian has long been lauded for embracing the internet early on, pioneering an online comment format now copied by its rivals, and leading the pack in data visualisation. Both The Telegraph and the Financial Times have drawn attention for shifting to “digital first” business models.

A look at our graph shows no relationship between the successes of these three papers. The Guardian has enjoyed some of the least dramatic losses of any paper we looked at, the Financial Times was strong for much of last decade but is now in a steep decline, and The Telegraph looks to be levelling out following a huge drop in circulation.

It’s difficult to say why this might be, but it’s likely because online and print readerships tend to be different. The average age of a reader of Telegraph.co.uk in Q1 2013, for example, was just over half that of the print editions’ readers.

Most UK broadsheet titles’ circulations are leveling out.

With the exception of the Financial Times, which competes in a slightly different market to our other examples, the decline of the papers we looked at appears to be slowing or stopping altogether.

It’s important not to be so forward thinking you forget what still works in the present. This is an important lesson to bear in mind when considering UK daily papers. A good story in The Times’s print edition is still spread across about 400,000 papers, and has been for two years. A story in today’s Guardian will actually reach more people than it would have this time last year.

We’ll be watching with interest to see if this is a plateau or a more long-running trend.