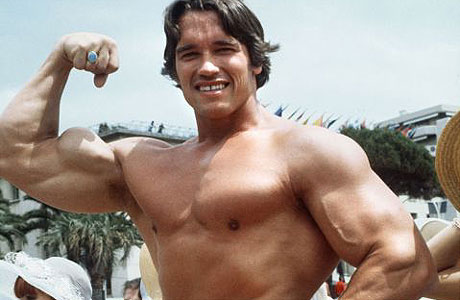 It’s impossible to escape the stories spilling out everywhere about Arnold Schwarzenegger’s love child – but did you know about the Sperminator’s long-lost half brother?

Neither did I, but then I saw the clip below – a clip from Russian TV featuring a terrible mime from a man who looked vaguely familiar. I did a little research, called in a few favours from Polish relatives who might have seen the footage at the time, and it turns out to be Arnie’s older half brother, Ernst, who died in mysterious circumstances in 1974.

This is the only surviving footage of what was supposed to be the Austrian entry to 1963’s Eurovision song contest. That year’s Eurovision was hosted by the BBC in London after 1962’s winners, France, could not afford to pay the costs. In fact the UK had only come fourth in 1962 – second and third placed Monaco and Luxembourg also turned down the privilege.

It is not known quite why Ernst was ousted from Austria’s Eurovision entry in favour of Carmela Corren, an Israeli-born singer; one can only assume that there was no political context; surely it was just that the song, and Ernst’s ability to mime, were simply not good enough. It isn’t saying much to suggest that Arnie is a better actor than his half-brother, but he is. More news on this as I get it.