Howard Zieff and Learning from the Past

I heard today that Howard Zieff had died – a name I’d not really encountered before, despite the fact that he’d directed a few breezy comedies like Private Benjamin, starring Goldie Hawn – but the obituaries made me sit up and take notice. It turns out that, when he started out in advertising, he was very much in the Jim Moran mold; a man who used wit to get people talking and whose campaigns kick-started the more realistic advertising and promotion of brands that has become so commonplace and important to modern advertising and PR. 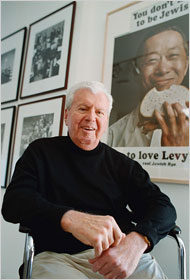 Raised in the Bronx, Zieff’s major breakthrough was to use real people in the adverts he created, real people whose faces told a story every bit as clearly as the adverts themselves. His most famous advert was for Levy’s rye bread, which ran with the tag line: ”You don’t have to be Jewish to love Levy’s.”

“’We wanted normal-looking people, not blond, perfectly proportioned models,’” he told the New York Times a few years ago. And normal for Zieff, who grew up in the Bronx, was a wide, multicultural mix. The Levy’s advertisements, therefore, featured an American Indian, a Chinese man and a black child.

“’I saw the Indian on the street; he was an engineer for the New York Central,” Zieff told the New York Times. “’The Chinese guy worked in a restaurant near my Midtown Manhattan office. And the kid we found in Harlem. They all had great faces, interesting faces, expressive faces.’”

Another of Zieff’s big, early campaigns was for The Daily News, which captured the spirit of Jim Moran on film; each advert featured a person reading the paper and becoming so engrossed that they accidentally did ridiculous things – a petrol pump attendant placing the petrol hose in his customer’s pocket rather than the car, for example.

He was also involved in bringing stars like Robert de Niro and Dustin Hoffman to the fore, thanks to his interest in strange and interesting faces rather than the perfection that was the norm of the time. Zieff, in the face of considerable opposition, created the template for a great deal of today’s advertising.

Modern advertising and PR, which has thrived on the witty, truthful and artfully homespun approach to promotion that Zieff instigated, often forgets one thing that he perpetuated, however; the determination to do something new and radical and his ability to get word of mouth out of it.

He created a buzz with his adverts using models from all cultures and walks of life, a stir that ran hand in hand with the mood of the times. He learned from the past and looked to the future, rightly assessing that in an era where Rosa Parks, JFK and Martin Luther King were changing the political landscape of America, brand promotion should not be far behind. He was always pushing at the boundaries to see where he could take his advertising next.

In an age of digital marketing and instant access to information, an age where that information is overwhelming, an age of recession, publicists and advertisers need to be taking the bold steps into new ideas that Zieff took or they are likely to be left behind.

It is no longer enough to rely on the ideas he created, which have become tropes and clichés thanks to their ubiquitous use. The past should be plundered, yes, but not for the ideas that have become stale with overuse. We should be looking at out of the box thinkers like Moran and Zieff and be inspired to think as hard, fast and wittily as they did, in the hope that we can create something new and exciting, something that will generate that holy grail of the publicity world; awed, surprised, astonished or even just amused word of mouth, something that people will talk about for years to come and that will, with any luck, become cliché in 40 years time.