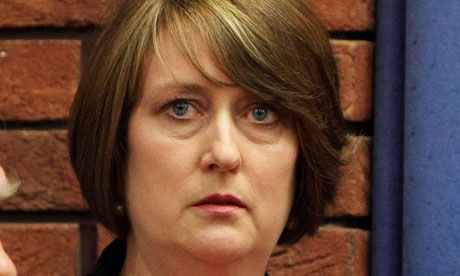 You almost feel like applauding; Jacqui Smith has done it again. Obviously deciding that, since she isn’t quite so busy with politics anymore, she may as well give The Sun something to do. It emerged yesterday that Smith recently borrowed two day-release lags from a charity run by Maureen Smith- a former political ally- to paint her house.

Oh, and on the day in question these prisoners should have been doing maintenance work in the local community. Lapses in judgement don’t come bigger than this.

This woman is pure publicity poison, capable of bringing down anyone associated with her, seemingly fixated on ensuring that best laid plans everywhere go awry. Up until now, however, her publicity woes have been much alike. They’ve all made whatever group or program she’s associated with look foolish, ill-balanced, short sighted. She’s been a blunderer, not a suicide victim.

This latest is different. She’s made an active decision which directly contravenes regulations that she must have known, and which were unflinchingly passed on to The Sun by a Prison Service spokesperson: “If prisoners have no work, it is made clear they should be returned to prison. Under no circumstances should prisoners be taken to work in a private home”. There can be no defence by broadsheet comments pieces, no mitigating circumstances and no personal element to shield her from the worst of the attacks.

She’s even provided a soundbite on the prisoners so good it makes me wish I was the hack who got hold of it first: ‘they had nothing else on’. It almost looks like she’s deliberately destroying her own public image along with that of a respected charity, and returning politicians’ self-serving indiscretions back into public conversation just when the current government needs it least.

That’s the key fallout from this: public conversation about criminality and social responsibility, dragged kicking and screaming into the foreground by the riots and their aftermath, will now be complicated by opinions thought finally buried after the expenses scandal. Smith has once again reminded us that MPs can be petty, and that constructing a coherently positive public face for them is near impossible. As Matthew Elliott of the Taxpayers Alliance put it: ‘Criminals are meant to be repaying the community not tidying up a shamed ex-MP’s backyards.’ Just as the Tories are seeking to firm up trust in the government-passing the buck onto social networking, getting all draconian on legislation- this rogue agent has blown their attempt at simplifying the moral debate sky high.

It’s utterly astounding that a politician who’s lived through the expenses scandal and the News International affair- two colossal and complex PR disasters- could be anything other than totally publicity savvy. The media is a coiled spring, and it shifts constantly.

MPs really need to be aware of the pressure cooker effect, because there is no doubt that the speed of the modern media will kill their career when they slip. What’s more, any half-competent opposition MP can now spew this all over social media and campaign material- nowadays it doesn’t really matter that there’s no election round the corner.

Smith needs to get on a positive PR track straight away and start sucking up to her constituency and party faithful . To be honest, it may already be too late.