One person who understood deeply and passionately about making the most of publicity – and who would have livened up the coming election no end if he had cared to participate in the process – was Malcolm McLaren, who died yesterday.

A non-conformist who enlivened punk with his arch brand of anarchy and who helped create the punk scene from the Sex shop he ran with Vivienne Westwood, McLaren was a massive inspiration to me. It seems appropriate that he died in 2010, the 200th anniversary of Barnum’s birth – they had a lot in common. Both started out as shopkeepers and both went on to radically alter the world of entertainment – Barnum with his freak shows and circus, McLaren with his situationist pricking and destruction of the ponderous music and hyper-inflated ego of the 70s music scene and beyond.

His influence has spread very far and often into unusual places, such as the art world. After all, there could have been no Damien Hirst or Tracey Emin without McLaren’s influence. As a teenager, collecting my NME from the local Village shop, I was in awe of his ability to paint news on the front pages of the papers as if they were his private canvases, ruthlessly exploiting interesting situations to create money making enterprises – usually out of the most unsafe of bets.

That, indeed, was one of the most admirable things about him and his maverick spirit – he relentlessly pursued the unsafe bet and helped it to change the establishment for the better, more often than not. My admiration only increased after meeting him in 1990. I also worked on the launch of Buffalo Gals Back to Skool.

Where are the mavericks now, though? They’re disappearing too swiftly and not being replaced. We need more people like Malcolm McLaren. Especially in politics. 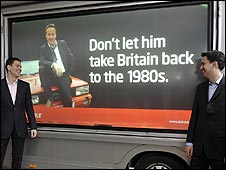 There’s been Gordon Brown, photographed with the cabinet to make it as clear as humanly possible that the Labour party’s woes are not all about him. ‘Look,’ the photograph insists, ‘I’m not the only one responsible!’ Nick Clegg has taken to appearing in photographs with his one asset – Vince Cable.

David Cameron, of course, has been pushing his wife front and centre, running for the cameras, trying to make himself seem like a virile man of the people with his sleeves rolled up. The Tories’ careful, planned approach can be seen most clearly in the praise lavished on a new Conservative press officer who sent two teams along to Trafalgar Square to hold up ‘Vote For Change’ placards as Gordon Brown made his way to Buckingham Palace to ask the Queen to dissolve parliament.

Every day people are going into huddles to think up the next act in the Punch and Judy show of electioneering and looking for unmashable content that can get their point across.

Labour must have been so pleased with their Gene Hunt/David Cameron poster, calling on the populace to not let Cameron take Britain back to the 1980s, until they realised that it took the edge off Cameron’s slick Notting Hill image – and then the Tories responded in kind, with photos of Brown perched on a 70s car smiling under the headline “Back to debt, decline and the 1970s with Gordon Brown”. If someone on either side can come up with a slogan or poster that cannot be spoofed, they will probably be knighted.

The sound bites are coming thick and fast too – it’s like gorging on a EEC mountain of foetid candy floss: “Campaign HQ’s deploy their big guns – SarBro and SamCam” anyone? There has been no real campaigning and it will continue this way until the great dividing line of the Leader debates. 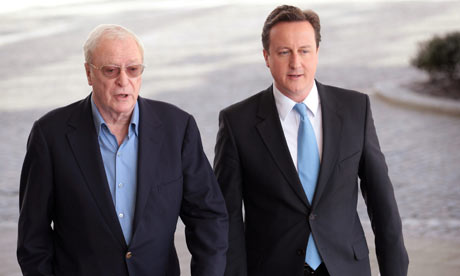 The end-of-the-week stunt to crown them all came from the Tory camp, who rolled out Michael Caine to back Cameron’s National Citizen Service – a voluntary scheme for teenagers that resembles the much derided (and hated by Caine when he served in the 1950s) National Service, except that it will be voluntary. Unsurprisingly, given the way the election is running so far, this is a scheme that Caine hopes will “do a bit more than just blow the bloody doors off”. Whatever that actually means.

There have been a number of counters to Caine’s endorsement of the Tories, but my favourite so far is from the brilliant Marina Hyde in the Guardian. She writes: “…the Caine hallmark is… not always a guarantee of quality. For every Hannah and her Sisters there is a Muppet Christmas Carol…”.

Everything in this content-free stunt election is so contrived and rigid and run by Facebook and Twitter. Stuart MacLennan, the recently-fired Labour candidate who used his Twitter feed to describe old people as “coffin dodgers”, amongst other things, has exposed the risks of using social networking for electioneering – but whilst it was patently unkind of him, it does make him seem immediately interesting by comparison to most of the rest of the nodding, smiling candidates.

One of the biggest fallacies doing the rounds with commentators at the moment is that Malcolm McLaren was little more than a redheaded Simon Cowell. Nothing could be further from the truth. The electorate are being offered a series of carefully controlled Simon Cowell karaoke clones as candidates.

Politics needs more people like Malcolm McLaren – people who will take risks and strive to create something exciting for the country as a whole rather than looking to create their own small legacy that will, in the end, matter only to them and not to the people they are supposed to be serving.