When I was 19, the publicist Theo Cowan – this country’s first pro celebrity PR wrangler, who created the Rank Charm School, an acting school run the Rank Film company that brought the world Roger Moore, Joan Collins, Christopher Lee, Diana Dors and more – granted me an audience in Poland Street. “Keep your clients’ feet on the ground,” he told me. “NEVER let someone believe a good review!” 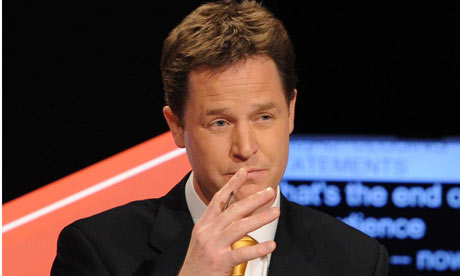 This is advice that needs to be handed on to Nick Clegg, after last night’s second Leaders’ Debate. He appeared to have spent the week following his remarkable showing in the first debate positively wallowing in the good reviews. Certainly his people believed the good press enough to let Clegg give Brown and Cameron enough room to make up lost ground. That said, he survived pretty well mostly thanks to the MPs’ expenses scandal allowing too many people to see the puppet strings in this campaign.

It’s not just leaders making up lost ground – since Obama swept to power, there have been no significant advances in new media’s ability to influence thing. Surprisingly, given that GE2010 was expected to have an enormous social media impact, all the balls are in the analogue media’s court after two game-changing Leaders’ Debates. It has been conclusively proved that many millions of people will watch old media if the content is great.

There’s no doubt that the experience is deepened and aided by new media, and by Twitter in particular, but that’s not what’s been driving the sudden change in the shape of British politics. In the same way that the X Factor created a big moment for old-fashioned “round the box with the family” television, the Leaders’ Debates have made politics absorbing. It’s been political karaoke, particularly from Labour and Conservative, and people like to see a politician who recognizes that he’s on strings and tries to escape them, as Clegg did exceptionally in the first debate and pretty well last night.

It’s this karaoke element that has lead to Gordon Brown’s complaints that this is too much about personalities. But then he is too prone to throwing stats at the audience still – even though his performance last night was more human. Whether he likes it or not, politics does get overshadowed by personalities and the majority of the people who have been newly engaged by these debates have been talking about the personalities as much as, if not more than, the policies.

None of the parties have truly harnessed the digital media – they still rely on pumping out propaganda and all saying that their leader won the debate. None of them seem to have learned from the satirical backlash on Twitter against the right wing press’s demonisation of Clegg – these papers are on the back foot since people started skitting their more rabid pronouncements.

It will probably come down to the third and final debate to carry forward the hype and the election. But will people vote? Have these debates given people the confidence to vote? And will the rumoured upsurge in registered voters translate into hordes at the polling stations? Perhaps we should take a Twitter poll to find out.