Cristiano Ronaldo and Paris Hilton: was it a stunt?

Could the tabloid-friendly sight of Cristiano Ronaldo and Paris Hilton in a Los Angeles nightclub the night before the footballer’s Real Madrid deal was confirmed be a coincidence? Originally published on the Guardian website 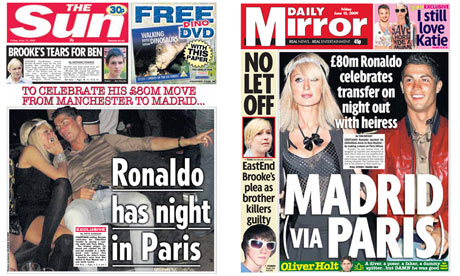 Call me a cynical old publicist but I have to admit that I am hardly surprised to see Cristiano Ronaldo spread across the tabloids today with Paris Hilton tucked under his arm at a club in Los Angeles.

It’s a marriage made in franchise heaven – the world’s most expensive footballer and the headline-grabbing socialite together on the eve of Ronaldo’s ascension to the giddy heights of football godhood – and an act of sublime stuntsmanship. It cannot be a coincidence.

Bear in mind that Real Madrid is almost certainly banking on being able to get more than a bit of loose change back from Ronaldo’s £80m price tag – not to mention his mooted wages of £200,000 per week – on the back of selling shirts, and it makes perfect sense that Ronaldo is to be found in an American nightclub… the night before the deal is announced.

They want to hook the American Latino market, which is where the US’s huge soccer audience is to be found. They need Ronaldo to follow in the golden boots of David Beckham. What better way than to place him at the jugular of America’s uber-celebrity, Paris Hilton?

Rumour has it that the deal was put in place a year ago – Real Madrid have had time, then, to plan an assault on the media to hurtle their player into the celebrity stratosphere. Ronaldo’s nightclub dalliance is simply the first step on the road to turning him into the biggest brand in the world of soccer. Already today, by playing the Paris card, he’s knocked Becks off the tabloid front pages in his latest photoshoot in his grundies.

All the ingredients have been carefully crafted and placed in the Petri dish of fame. Over the coming weeks we are going to see a new mutant ogre celebrity emerge from the stew that’s been cooked up.

Football is less and less a game of two halves – it is becoming more like a 3D chess set. On the lowest level is the game itself. Above that are the great players and their wives and girlfriends. But on the topmost level are the superstar money-spinners like Beckham, who hardly even need to play football anymore to earn everyone a living – and now Cristiano Ronaldo is clawing his way up there too.

It’s game on for the press. The planning phase is over and the celebrity games have begun. You can forget the likes of SuBo and the reality freakshow turns – Cristiano Ronaldo is where the uber money’s at. This is the million dollar deal.